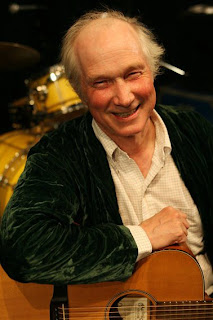 Jack Hardy died yesterday. Most of you won’t know Jack Hardy, or his music, but if you were anywhere near the New York City folk music scene in the past 35 years, you sure did. He seemed to be everywhere. He certainly was an influence to a tremendous number of the talented young writers and singers who emerged from that scene. People like Suzanne Vega, David Massengill, Shawn Colvin, Lucy Kaplansky, Richard Julian, John Gorka, Nikki Matheson, Rod MacDonald, Josh Joffen, the Roches and many more all learned at his feet, sometimes literally in weekly songwriters’ get-togethers at Jack’s apartment in the village, where ideas and songs were tossed back and forth, and challenges were issued. One time someone, I think Jack, challenged a brilliant young guy named Richard Meyer to write a song about the Teapot Dome Scandal. (Don’t know it? Look it up!) and Meyer came up with an absolutely stunning song called “The January Cold” about not only the scandal, but the humanity of the corrupt presidency of Warren Harding.
Later, Jack was instrumental in starting a combination magazine/record called first The Coop, and then the Fast Folk Musical Magazine, a roughly monthly 12 song vinyl LP combined with a magazine that was the first place that many people would get exposure to the artists listed above, and others like Dan Bern, Lyle Lovett, Nanci Griffith, Tracy Chapman, and more. Each year Fast Folk concert revues were held at places like the Bottom Line and the home base for the scene for a while, the retro and rather tacky looking Speakeasy. I went to many shows at both and had a blast.
My personal experience with Jack Hardy was somewhat limited to brief “hello”s at his gigs, with one kind of remarkable (to me) exception.
WNEW radio DJ Pete Fornatale, a folk fan who would delve into the Fast Folk library often, played a song by a man named Ray Lambiase, called Free Men, and he mentioned that it was on Great Divide Records. I somehow found a phone number for the record company, and gave it a call one day. Jack Hardy himself answered the phone. I told him who I was and why I was calling. He asked me all kinds of questions, about how a young guy in Kerhonkson, New York, in the Hudson Valley, knew about the record, and how I had heard an FM signal that shouldn’t have reached where I live (I had jerryrigged my cable TV signal to my receiver, before such a thing was really known) and we talked for about a half hour about which musicians I liked and my own experiences. He then told me that he had a copy of the record sitting there and asked me for my address. I gave it to him and asked him how much the record was and where I should send the money, and he told me, in his raspy voice, “My treat.”
Later I got to meet the great man at another Jack-propelled event called “A Gathering of the Bards” at a lake near Monticello, New York, where I played catch with a Nerf football with John Gorka and walked in on another singer in the shower with his girlfriend. Such were the times.
So it was with great sadness that the news of Jack’s passing came to me via an email from some folk music site. Quick flashes of what I related above came back immediately, and then the songs I loved best by the man himself---Tinker’s Coin, Elevator, The Children, Síar ón nDaingean (West of Dingle) and many more. One song, called I Ought to Know, is one of my ten favorite songs of all time, a challenge to us all to learn the really important stuff in history, much like Howard Zinn’s People History of the United States, but without a single fact given, only a laundry list of what the singer ought to know but doesn’t. It certainly made me look up all of its references. I am including the full lyrics here. Hopefully anyone reading this will do as I did. You ought to know about this stuff. And you ought to know about Jack Hardy. I’m glad I did.