A Murder by Any Other Name 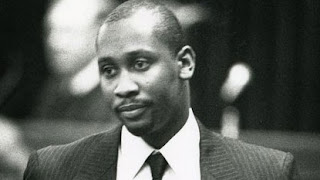 So now little Jackson, Georgia is on the national map, with CNN, FOX, ABC, CBS and NBC and many more news organizations all converged, just 7 miles from where I write this. They have converged on Jackson not because someone here found a cure for cancer or because a huge industrial complex is being built that is going to help thousands of Georgians get jobs and get off of the welfare and unemployment rolls. Not for any positive reason at all. They all converged to cover a murder.
The death penalty---if ever a sentence could be construed as “cruel and unusual” the death penalty qualifies. It’s been said that war is the lowest form of human behavior, and yet in war, which I heartily am against, there is at least a cause, right or wrong, that is being fought for. Thousand, nay, millions have died in wars over the centuries, for a cause they believed in.
There is no cause being fought for in the death penalty. It certainly isn’t “corrective” or “rehabilitative” except in the sense of making sure that the condemned will never do it again. The simple fact that they are in prison already pretty much guarantees that though, doesn’t it?
I never met Troy Davis, nor would I want to, to be honest. It does not sound like he was a very nice guy early in his life. He probably committed a lot of crimes. I don’t know. At the end of his life his public statements sounded very intelligent and thought out. If he was the one to utter them , then I’d say that he made the most of educating himself while in prison and might have been able to contribute something to society.
With all due respect, the murder that he committed, allegedly, had nothing to do with intentionally killing a cop. The officer in question, Mark MacPhail, was not on duty at the time of his killing. He was moonlighting as a security guard at a Burger King restaurant. A fight broke out in a parking lot nearby and Mark MacPhail left his job at Burger King to intervene. Shots were fired, Mark MacPhail was killed, a tragedy to be sure. In the middle of a fight, things happen in the heat of the moment, and I’m sure that was the case on that night.
In court a lot of people testified against Mr. Davis. Later, 7 of them, whose testimony was key in his conviction, recanted their statements, infusing the case with enough doubt that at the very least the death penalty should have been taken off the table, and Mr. Davis should have been left to live out his days in prison. But it wasn’t, and the masses of reporters and media people converged on our little county.
As I said, war at least has a cause, right or wrong. To walk a man or woman into a chamber, strap them down in a chair, or on a gurney, or to a pole, or to let them stand on a scaffold with a rope around their neck, blindfolded, and to then either pull a switch, or drop pellets into a bucket full of acid, or to signal a group of people to all fire bullets into the heart of the condemned, or to give the word to release the trap door so the condemned can fall until their neck snaps, and they die, or to just inject a lethal cocktail of drugs into a shaking arm, all in front of a group of witnesses…is about as barbaric as it gets. We are a supposedly the most sophisticated of creatures. Last night, in a prison in Jackson, Georgia, we were barbarians.
Posted by HeyyyyyyAbbott at 7:35 AM 16 comments: 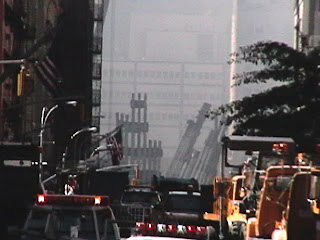 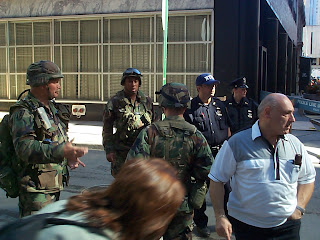 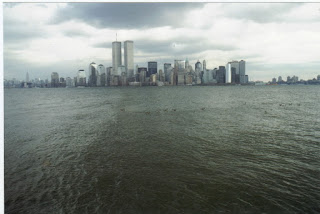 It was ten years ago this weekend that the unthinkable happened, and the words “New York” and “terrorist attack” became forever and inextricably linked in the minds and hearts of the world.
I remember that Tuesday morning clearly. I was returning from delivering a truckload of corn to some farm stands in Monticello, in upstate New York. The Ellenville Public Library was on my way back to the farm in Accord, where I worked summers for Saunderskill Farm. I stopped in the library to look for new books, as I often did. Everyone in the library was standing around the one computer that had the Internet, and I could see that a live video feed was on the screen of the World Trade Center in flames and I recall the smoke pouring into the sky as the image I saw that day. The second plane had just hit but the reality of the situation was still almost too big to grasp. No one flies jet planes into buildings. It’s just not civilized.
I returned to the main farm stand and it was as silent as a tomb in the place, except for a radio broadcast describing the events, and I listened to a newsfeed telling us that first one building was gone and later, the other. I don’t remember anyone actually working, just people standing and walking around in shock. This was, after all, only about 90 miles away from where we lived and worked and enjoyed the bucolic setting that living in the Hudson River Valley offered.
In the years since that day, a lot has gone on. The mastermind of the attack is in prison, the leader of the group that sponsored the attack is dead, and from the rubble of those two buildings, finally a new building is risen, over a thousand feet now and still growing. Something positive, something to look forward to.
But, sadly, in those years it seems that the amount of hatred and fear in the world has grown too. People are afraid of their own shadows. Politicians squabble and name-call like little children in the schoolyard. Common decency has been replaced by paranoia and at times it feels like we are re-living the Witch Hunt era. Or the McCarthy era. And it stinks.
It stinks because we are better than that. We are a nation of do-ers, not a nation of name-callers, neighbor-haters, or ”shoot first ask-questions later” haters, to use current parlance. We achieve. We lead, by example, in ideas, and in deeds. We endure because the world knows quality when they see it. Why else would so many risk so much to come here, legally or otherwise?
Despite the miserable state of this country right now, due in large part to the negativity mentioned above, I am still proud to be an American. I am proud to stand for our national anthem, lousy song that it is, and I still say the pledge of allegiance on occasion. “One nation indivisible”, the original words by Francis Bellamy read.
Pogo said, "We have met the enemy and he is us."
It’s time to show Pogo he was wrong. And that Mr. Bellamy was right.
It’s been ten years, enough time to mourn. It’s time now to unite, as people, as neighbors, as human beings, and as a nation, indivisible. I’m on board. You?

A recent entry on my blog dealt with the suicide of a woman, and friend, here in my town. It also dealt with the very unkind things that her co-workers at the Butts County Library had to say, after her death, which was by gun, traditionally a very unusual method of suicide for women.
According to the folks at the library, Kathy Mims was “a sociopath,” said label placed on her forever now, with no chance for her to refute, or confirm that “diagnosis.” It seems to me that she was just a terribly sad and lonely woman, just divorced from her state trooper husband after decades of marital hell. Loneliness plus booze equals bad ending. I wondered if there were other factors, because I had spoken to people who knew her, and they felt that she was going to be okay once the newness of her divorce had worn off.
Without even trying, I managed to find out a little bit of information about her last day alive.
According to the cleaning lady for her landlord, who I encountered on a walk to the library, ironically passing Kathy’s apartment, Kathy spent a lot of time coming and going from her flat, and apparently had been drinking a bit. Not to excess, but enough to make it noticeable. At one point Kathy asked to speak with Judy, the landlady. Judy was not at home, and Kathy told the cleaning lady that she needed to talk to Judy about something not terribly important, either that day, night or the following day. She stressed that it was not any big deal, and that was that. The cleaning lady told me that after Kathy’s suicide, when the police went into Kathy’s place, she had everything neatly arranged and it was very clean and tidy. That in itself means nothing because Kathy was noted for being rather fastidious.
I thanked the cleaning lady for the info and went on. The very next day I was mailing a package at the post office, and was making small talk about my walk with the clerk, whose name was Judy---the very same Judy who was Kathy’s landlady. We talked about Kathy, and that day. Kathy did indeed get in touch with Judy and she told her how much she enjoyed living at her place. She also told Judy (and I assume this was the reason Kathy wanted to talk to her) that she had been fired from the library, which was why she was not working that day. I guess she wanted to let Judy know that the rent was covered and to not worry. She actually seemed to be okay with the firing and told Judy that she was going to try to get a job at Barnes and Noble, a place she had worked previously, and had liked. Judy was not under the impression that Kathy was in a suicidal mood.
Later that night, though, she returned to the house that she had shared with her ex-husband. She aimed a gun at herself and pulled the trigger.
I only write this because I liked Kathy, and her dry and wicked humor. The odd reactions from her co-workers have been unsettling, and I think I know why. It seems that they had to put up with a lot of grief from Kathy, due to drinking problems, last minute sick calls and so on. I can understand that. I can also understand why no one there told me that she had actually been fired. The guilt that the head librarian must feel cannot be understated. I hope he doesn’t let it linger too long. He had to make a tough decision, and he did.
So, Kathy Mims, I bid your ghost goodbye, and hope that if a small part of you still lingers in the ozone of our lives, it is at peace.