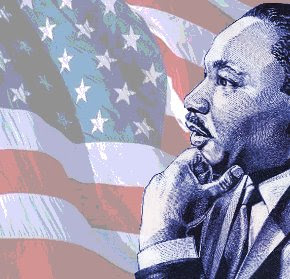 It’s one of those holidays that seem to slip by us, almost unnoticed.
For some, it’s just another day. For others it’s a day off. There is even a segment of society who dislike the holiday and all that it stands for. But for many, it honors the life and achievements of a special human being---a man whose very name brings a flood of images and words to our thoughts.
We all know the story of Martin Luther King---man of God, man of peace, a man for all people. An orator against whom all others are judged. A martyr, who died as he lived, fighting the good fight, preaching non-violence and equality, trying to make this world a better place where all people of all colors and creeds can live together in peace and harmony. He wasn’t original. He followed the lead of the biblical Jesus, but more importantly of a modern giant named Gandhi.
Many people still don’t know the story of Mohandas K. Gandhi, who almost singlehandedly gained independence for India, a country colonized by the British. He did this not with guns and weapons, but without them. He did it by mounting a campaign of nonviolent resistance to British rule. It was, among other factors, violent acts against unarmed and peaceful civilians that ultimately made the British look like thugs and bullies and soon England was offering independence to India, as a way to save face. Then, as now, religion also played a factor as Muslims and Hindus clashed, resulting in the creation of Pakistan, in the northern part of India. But things still weren’t peaceful, and in 1948, Gandhi was assassinated as he walked to a prayer meeting, shot three times by a Hindu fanatic who objected to his tolerance of Muslims. Murdered, in cold blood, for the perceived crime of being tolerant.
Dr. King was a follower of the ways of Gandhi. He tried to bring people of all colors and religions together, in peace. Utilizing the methods of non-violence practiced by Gandhi, the scenario in the United States played out much as it had in India: black citizens, who were then called “Negroes”, were brutalized in public by police, sometimes with dogs and billy clubs. Sometimes they were blasted with high pressure firehoses. Little black children were barred from going to school with white children, and the governor of Alabama made a public display by standing in the schoolhouse door to block two girls from entering. Bullies don’t like to be embarrassed, or to be made to look bad, and when they are, they often lash out. The racists and segregationists were made to look bad to the point where one of them picked up a high-powered rifle one fateful day in Memphis, Tennessee, in early April, 1968.
We are big on symbolism in this country. Holidays are symbolic. We honor dead presidents, old religious traditions, even explorers whose very “accomplishments” are suspect. Yet, in the case of the flesh and blood Dr. Martin Luther King, we have a man who walked among us and who spoke to us, and whose speeches are recorded on tape and film for us to watch over and over again. A man who was brutally and coldly murdered in front of us. That’s reality.
So let us ensure that his birthday, January 15, is more than just a symbol. Let it be a reminder that we still have a lot of work to do in his absence.
Dr. King, we honor you, and your sacrifice.
Posted by HeyyyyyyAbbott at 12:40 PM 4 comments: