The murder should NOT be televised... 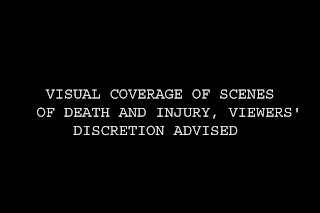 Recent world events have gotten me to pondering the responsibility of the very institution of which I am a part. I am referring to the media, and in particular those outlets that report the news of the world.
I was appalled this week to hear of the killing of Moammar Gaddafi. For a country who are interested in democracy, summarily torturing and executing someone is not a very good first step, but it is what happened. What was more appalling to me was the media, who felt the need to broadcast various videos that were shot with what appear to be camera phones. They did not just show photographs of a deposed dictator’s dead body, but live action of Gaddafi being punched, dragged to the ground by the hair, kicked and stomped, and most revoltingly, sodomized with a long knife, as he shrieks and falls to his knees in agony. At times the camera is so close to his bloody head and face that I’m surprised his blood didn’t smear the lens. It is also possible that his murder was filmed as well, but the video is very jerky and there is a constant rat-a-tat of gunshots all along so it is impossible to tell exactly which shots might have been the fatal ones. It was so brutal, this video, that I can’t imagine that the last thoughts of Gaddafi were not bprayers for it to be over. I know that was what I was thinking as I watched this nonsense.
I was also appalled last week to see a similar lack of scruples from a couple of so-called media outlets. With the trial of Cr. Conrad Murray going on in Los Angeles, a picture of a dead, post autopsied, and nude Michael Jackson was shown to the courtroom, and a photograph of that image was broadcast around the world. Apparently the concept of human dignity has escaped some of these entities, whose goal now seems to be to shock, instead of inform. One was an internet website, but the other, sadly was a major TV network, who I thought would take the high road, but didn’t.
I, and the world, do not need to see this. It serves no useful purpose to show Michael Jackson, who brought so much joy to the world, deprived of his last bit of dignity. For many the image of his lifeless and naked corpse, sprawled on a table, will be the image that comes to mind. I certainly hope that his children did not see it.
As for Colonel Gaddafi, he was an evil man, but that is why there are procedures in place to deal with crimes against humanity. They, at least in theory, keep the world from taking a backward step as we supposedly become more civilized.
There was a time when media was more responsible, and more selective and thoughtful in what they presented. There is the famous story that reporters knew that President Kennedy was bedding down starlets left and right, but that out of respect for the first lady, they did not use that information to hurt him. Those days of restraint are sadly gone, and it is a free for all. Paparazzi line up for big money shots of celebrities, and when they get them it is all over the internet and airwaves. The former King of Pop dies of a drug overdose and we get to see him stripped, literally, of all dignity. And a dictator is violently tortured and killed on video.
Just tell me want happened. I don’t need to see it.
Posted by HeyyyyyyAbbott at 8:14 AM No comments: 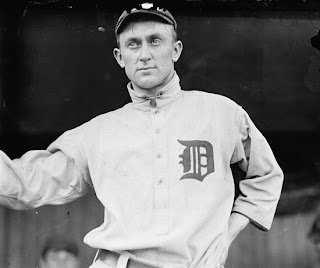 Call it redemption…sort of.
When I was a boy, I had two heroes. Wild West lawman Wyatt Earp was one of them. I loved the stories of the old frontier, and how the Earp Brothers and Doc Holliday had tamed Dodge City and made life there as safe as your grandmother’s kitchen. But the Wild West was another world for me, and seemed out of reach and reality. What was closer to my heart was baseball, and my first real hero was Ty Cobb, from Royston, Georgia.
Cobb was a legendary baseball name, and I often heard my grandfather, who had played minor league baseball in the early years of the century, and who had seen Cobb play, talk about his exploits. Later I read as much as I could about the man, and a dog-eared copy of a 1952 biography by a man named Gene Schoor was my prized possession for a long time. Schoor’s book, though, was written for younger readers, and therefore was sugarcoated. It was another book, by a writer named Al Stump, that drove it all home, and told the story of the man’s life in more vivid detail and first introduced to me the reality that Cobb was possibly psychotic, was definitely racist, and had allegedly even killed a man. and made me lose all respect for my boyhood hero.
Stump had spent time with Cobb in the last year of Cobb’s life, 1961. He had access to Cobb that few had had before, and painted a vivid and extreme picture of a man prone to violence, a paranoid and sick individual who told Stump, on the record, that he had killed a man by slashing his face with the barrel of a pistol, until the man had no face left. Stump also related how police in Detroit had found an unidentified body in an alley a few days later, a crime that was never solved.
It was all too much, and my interest in Cobb, the baseball player, was destroyed by the information that Al Stump had given me in his 1994 book. I never thought about Ty Cobb again in the same way.
Until last summer, when I visited the Cobb family crypt in Royston, Georgia. It was a belated pilgrimage for me, to be sure, but when I realized that I only lived about 90 minutes way, I felt it was time. I went, driving past the hospital that Cobb had built for the people of Royston, past the signs proclaiming Royston the home of the world’s greatest baseball player, to the crypt, in a quiet little cemetery just down the street from the hospital, and where Cobb is interred with the remains of his beloved mother and father. And the thoughts of all of the evil things that Al Stump had told us in his book ran through my head. I peered through the smudged glass of the crypt door at the very spot where my hero’s bones lay, about 5 feet from me, and just sighed a sad sigh. My hero, the murdering racist paranoid villain.
Then, last month, Smithsonian Magazine published an article, entitled “The Knife in Cobb’s Back.” Years of research, painstakingly vetted, proved to the world one fact: Al Stump was a liar and a thief. It turns out that not only did Stump make up most of the vile stories about Cobb’s evil ways, (the police in Detroit have no record of a body or even an injury from the night that Stump says Cobb killed a man) but that he also stole hundreds of thousands of dollars’ worth of Cobb’s possessions after his death, to sell for his own enrichment. He also forged many letters from Cobb, and tried to pass off as genuine, fake Cobb owned items like dentures, duck decoys and corncob pipes.
The real damage, though, and the one that Cobb likely would have been most upset about, was the damage to his reputation, which was something that Cobb had worried about in life. He was a proud man by all accounts, and to have history blinded to his real achievements, by a liar and a thief, is a crime that needs correcting here.
The Georgia Peach may not have been anyone’s idea of a model citizen, but he was one helluva ballplayer, that’s for sure.
Posted by HeyyyyyyAbbott at 8:32 AM 2 comments:

I just got the following email as a response to my column in the Jackson Progress Argus. I’ll leave out the name of the sender to protect the ignorant.
Don't like death penalty in Jackson? Take your happy butt back to New York. How would you feel if it were one of your family members? Or are yankees in New York so use to violence they accept it ? What is your business in Jackson so I can be sure not to frequent? We forgive and forget, just don't offer up another chance.
Something about this letter really ticked me off. It is certainly indicative of the backwards mentality that pervades the area. I thought about this for a few minutes and then fired off the following response. Was I too harsh?
You obviously dont forget, since you call me a Yankee,a reference to a time when your lovely state of Georgia, and others, committed the ultimate act of treason by seceding from the United states of America. And yet, y'all still fly that ugly confederate flag as if a symbol of something good, instead of the vile rag that it is.
As for the death penalty, Ill allow that the family of the slain security guard (that is what he was doing that night, moonlighting at a Burger King) might want the death penalty. As bible thumping, so called "Christians" (read: hypocrites), you should be of the opinion that all life is sacred, even that of Mr Davis, a man whose very guilt is in question. By the way, you are terribly behind the times. The violence here in Georgia is far worse than in New York--much more violent and senseless. Id tell you what my business is but you might want to drive by and shoot out my windows, or set it on fire. That IS how y'all do it down here, isnt it?
Life in the south. That is what Troy Davis should have gotten, if anything. This shoot/kill first ask questions later attitude that is all over this state, and this part of the country, is so sickening and repulsive that I don’t know how a lot of these people don’t make themselves sick. Just last year the sheriff of Butts County, a “man” named Gene Pope, tried to kill a fellow who had stolen a truck, and which was surrounded by state troopers. He blew out the windshield of the truck but somehow missed the man driving it. He, or his deputies, did manage to shoot a trooper in the chest and arm, though. The repercussions: none. He was lauded as a hero for trying to blow the guy’s head off. Pope himself was interviewed by reporters and lamented the fact that he had missed the guy. In more civilized parts of the country he would immediately have been removed from office pending an investigation. Not here, where, among white folks, he is a hero. Among black folks, though, the perception is different, and most of them steer clear of commenting, rolling their eyes and shaking their heads at the ridiculousness of this kind of thing happening in the year 2011. I have to agree.
Posted by HeyyyyyyAbbott at 3:12 PM No comments: